aThe current climate crisis is an ultimate expression of the failures of an economic and political system that is fundamentally unjust, which through the unrestrained consumption of natural resources and the exploitation of people results in the concentration of wealth in the hands of a small minority. Climate change is a reflection of a civilizational crisis, in which elites and corporations working through governments and international institutions have achieved a status quo in which economic growth is conceived of as the only way to achieve “development,” therefore driving aggressive extractivism, accelerated industrialization and oppressive commercialism that is pushing the planet towards uninhabitability and the great majority of humanity into misery.

Unfortunately, trends in global emissions continue on their course towards the worse case scenario, the impacts of which are already being felt. These effects are compounded by the over-consumption of natural resources and pollution that stem from extractivism and the logic of our current global economic system, materializing in the rapid loss of biodiversity and degradation of ecosystems, a reduction in the availability, quantity and quality of freshwater sources, and the decline of food production systems, causing irreversible damage to the environment as well as the rights of human beings.

Regrettably, the global reaction to this systemic crisis has been to elect conservative and nationalist populist leaders who continue to double down on the pursuit of economic growth and global trade. In either case, the world’s democratic systems are deteriorating while authoritarian regimes are on the rise.

Subsidies for production, tax waivers, environmental deregulation, the flexibilization of labor, disregard for the rights of indigenous communities to free and informed consultation, the criminalization of protest including state intervention against social organizations, as well as the propagation of foreign loans — which always come with conditions attached — are the principle policies used to promote foreign investment.

These policies, far from being economically or environmentally sustainable and socially just or reducing poverty, serve to consolidate the power of elites and corporations, increase the concentration of wealth in the hands of the few, consolidate colonial power relations, further entrench bureaucracy and corruption — but most importantly, they directly impact communities that are the first to suffer from structural inequalities. And, facing deteriorating conditions as climate change advances, these communities are left even more vulnerable.

Although certain countries bear historical responsibility that should be recognized, it is important that we develop a broad and complex analysis of the structural responsibilities for climate change, capable of recognizing that behind the emissions that are produced by each country hide the interests of corporations and the actions of governments in establishing their internal policies.

The limits of states and multilateral agreements

In negotiations at the United Nations Framework Convention on Climate Change, attempts to achieve a real agreement that would stabilize global temperatures at a rise of no more than 1.5 degree C and avoid catastrophic and irreversible change are on the verge of failure principally because these negotiations fail to tackle the structural causes of the problem, nor do they aim to limit the activities of corporations responsible for emissions. Nor do they provide mechanisms to ensure that 80% of proven fossil fuel reserves remain in the ground, nor provide for a fair transition towards non-fossil fuel energy for the communities that are most affected. On the contrary, these negotiations have become a setting in which to promote the same logic that has destroyed the world. Discussions at the negotiations alternate between opening new opportunities for investment, and promoting false solutions like carbon markets, climate-smart agriculture, or geoengineering.

The changes that are needed to avoid a climate collapse scenario are so radical that they would involve a high degree of economic risk and directly affect the profits of corporations and private businesses that operate across the world. However, in their geopolitical negotiation strategies, governments never risk their own economic growth. On the contrary, policies that shore up the privileges of elites and corporations already determine what position states will take, before they ever get a chance to sit down at the negotiating table.

Under these inauspicious conditions, it is difficult if not impossible to hope that these negotiations hold any hope to help us avoid a climate crisis or promote a fair transition for the most vulnerable communities and populations. 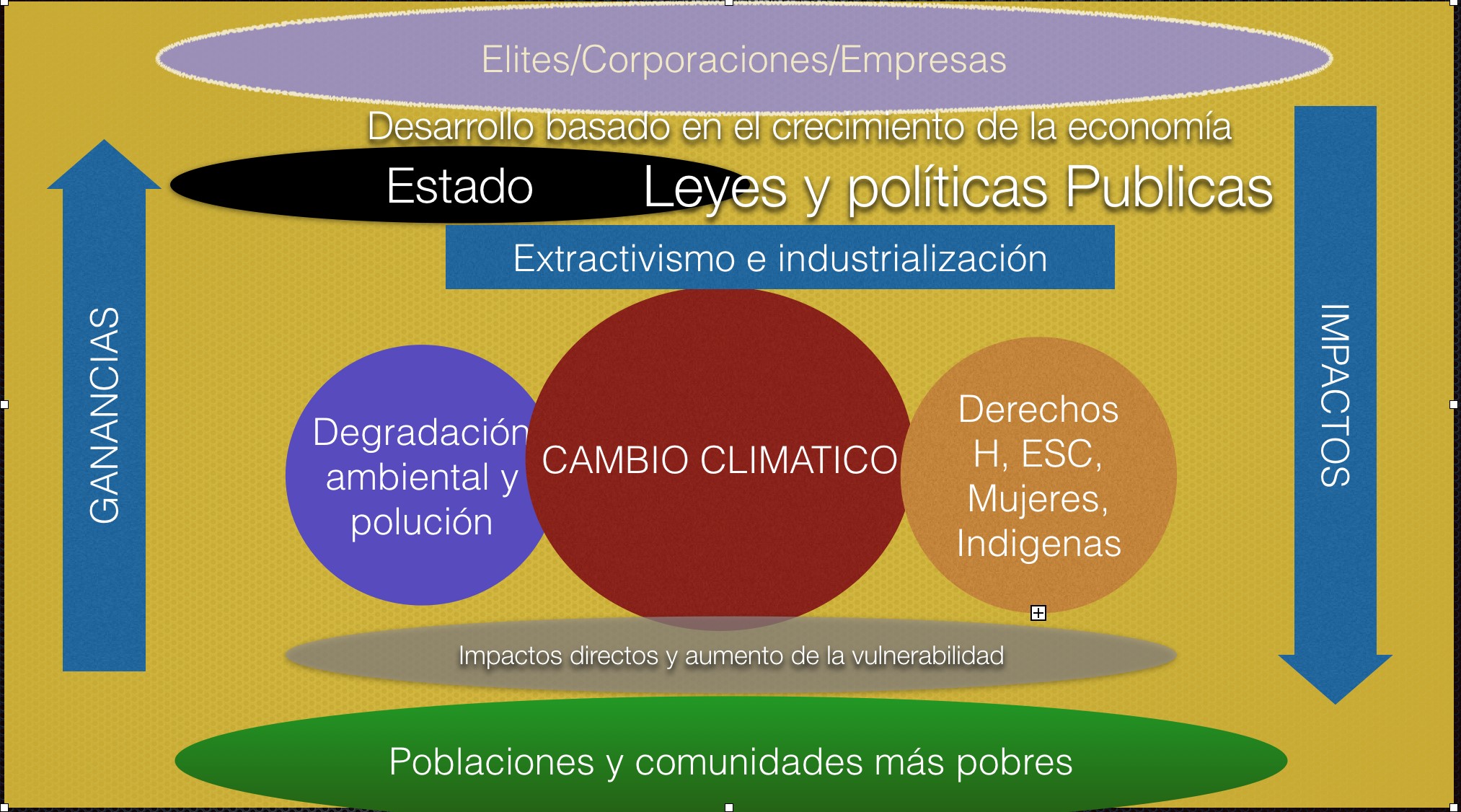 Taking into account the urgency of the situation, alongside historical responsibilities, the role of corporations, development policies, the limits of international negotiations, the developmentalist agenda of national governments, and the enormous threat stalking the poor and vulnerable populations of the world, our concern for a fair transition cannot simply stop at demanding recognition for the historic debt of developed countries, but must demand that the provision of financial resources, technology transfers, and capacity building be included in the framework of the UNFCCC.

The report “After Paris, Inequality, Fair Shares and the Climate Emergency,” highlights that, in order to achieve a fair and effective transition away from energy systems dependent on fossil fuels in the context of global poverty, special attention must be paid not only to inequality between countries but also to inequality within countries, between the rich few and the poor majority, if we want to keep global temperatures from rising over the 1.5 degree C threshold. In this vein, the report also points out that the wealthy (individuals as well as companies) in every country should take bold actions in order to reduce their own emissions and support a global transition away from fossil fuels. Furthermore, “the global elites must not pass responsibility off onto the poorest and most vulnerable.”

However, the idea of a fair transition does not mean that “developing countries have the right to continue increasing their emissions under the pretext of eliminating poverty and the right to development.” Developing countries, while demanding reparations for the historical debt that is owed them, cannot put off immediately starting the process of profound and gradual transformation that will in the medium term overhaul their economies, energy systems, and systems of production to foster small scale, community managed approaches.

The reality is that the world will likely face the worst case scenario with regard to climate change, and it is highly possible that the collapse of the planet’s thermal regulatory mechanisms will come to pass sooner than predicted, that communities will have to face the worst impacts imaginable, and that no real political will exists amongst the governments of the world to make the necessary changes to avoid catastrophe. In this bleak scenario, we must urgently reduce other compounding factors that contribute to the vulnerability of populations within countries — restrain extractive industries, fight against the power of elites and corporations, eliminate social inequality, achieve the liberation of our economies from the world market, improve the health of our democracies, demand respect for the rights of communities, and change the orientation of development policy. This is the most urgant, necessary, and possibly effective strategy that we can take in response to the crisis that approaches.

In order to achieve a fair transition, we will have to make it ourselves on the streets, in the neighborhoods, in our organizations and communities, by confronting the power of elites and corporations, defending communities and denouncing the abuse of rights, opposing the imposition of extractivist projects that damage to our Mother Earth, and by building strategic solidarity for coordinated action between social movements and communities that are systematically attacked by the powerful.

CLIMATE JUSTICE NOW!
CHANGE THE SYSTEM, NOT THE CLIMATE!